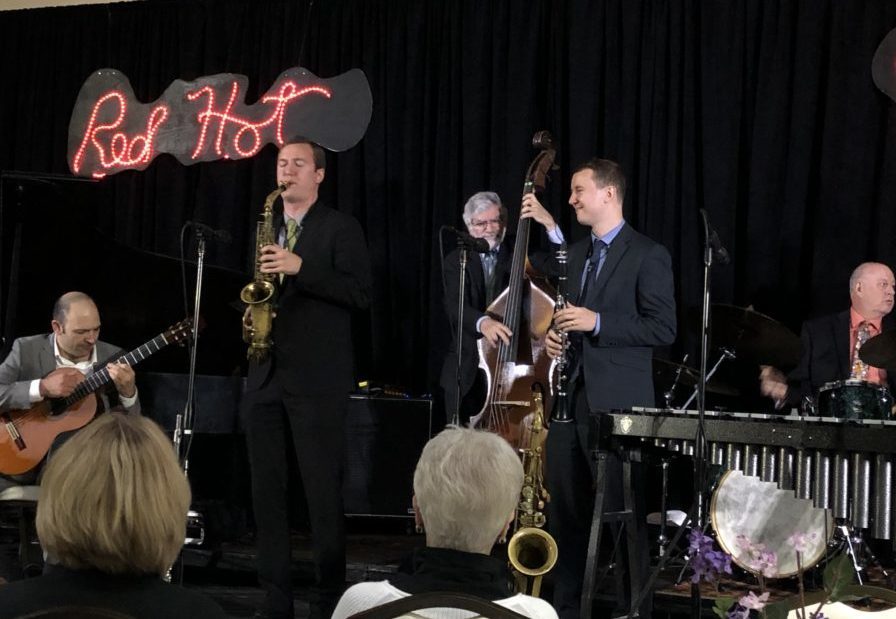 All 15 musicians arrived safely and made it to the hotel in time for the first downbeat. Music Director Johnny Varro did a great job of creating sets with musicians who sound great together!

The ballroom was ready for sponsors, patrons from out of town, local members, and students! Everything looked absolutely perfect.

A few musicians made their first appearance at the West Texas Jazz Party this year. Peter & Will Anderson have performed numerous concerts here in Midland/Odessa, but had never played the party. They were, of course, a huge hit and we are eager to have them back!

Also making his first appearance at the jazz party was guitarist Nate Najar. Nate came to give a concert in Odessa in October of 2018, and our audience loved him so much we decided to bring him back for the party. Nate is a stellar player who is sensitive to his band mates and plays with ease and nuance.

Bass players Richard Simon and Richard Moten also made their jazz party debut. Each one brings a solid foundation to the bandstand, and improvises with ease. We are so glad they came!

All the other musicians had attended multiple parties before and had many fans in the audience. They were:

Saturday morning included the annual (and much anticipated) brunch. The MCM Eleganté provides a fabulous setup and the bacon was to die for! The music played from 11 am until 3 pm, and the musicians really brought their A-game!

Saturday night saw the largest crowd in many years at the Jazz Party! Lots of local jazz lovers came out to hear the music and all had a wonderful time.

Sadly, as always, the music has to come to an end for the year. We are so thankful to each one of the musicians for their artistic talents and wonderful friendship. We hope to see you ALL next year for number 54!