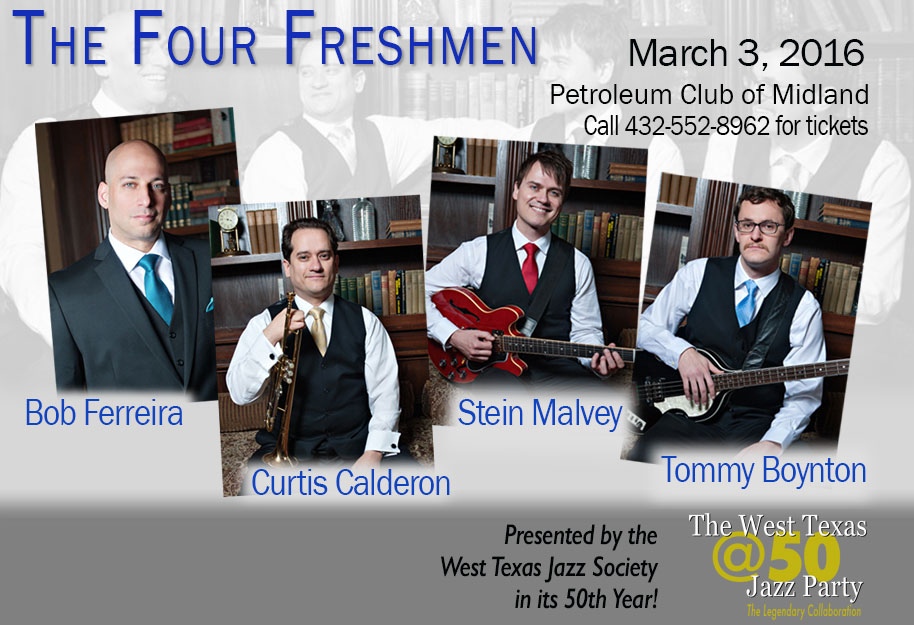 The West Texas Jazz Society welcomes the swinging and tight knit harmonies of The Four Freshmen to the Permian Basin as one of our signature events leading up to the 50th anniversary jazz party.

Join us on March 3, 2016 at the Petroleum Club of Midland for a great jazz evening with the Four Freshmen. Chef Lou Lambert again prepares the meal – Check back for the menu!

The Freshmen have been recording for 67 years, having gotten the attention of various jazz figures of the 1940s, including Dizzy Gillespie, Woody Herman, and Stan Kenton. Kenton took matters into his own hands, bringing the group to the attention of Capitol Records, where the bandleader had a longstanding relationship. The band began a long and fruitful relationship with Capitol Records — initially under the guidance of arranger Pete Rugolo — and gigs followed on The Steve Allen Show (then one of the top-rated entertainment showcases on television) and with Ray Anthony’s band. The group also made a brief appearance in the MGM movie Rich, Young and Pretty.

Their first hit single was “It’s a Blue World,” released in 1952, and they enjoyed further success with “Mood Indigo” (1954), “Day By Day” (1955), and “Graduation Day” (1956). Their first LP, Voices in Modern, came in 1955 (and some dozen more 12″ discs over the next five years). Voices in Modern was as impressive a jazz document as it was a vocal pop effort, showcasing the group members’ playing as well as their singing and showing that these guys had lots of complex musical strings in their bow.

During their staggering 67 year legacy, The Four Freshmen have released more than 60 albums, won numerous DownBeat and JazzTimes readers’ polls, and have been honored with the Satchmo Award for unique and enduring contribution to the living history of jazz.

The Four Freshmen remain the Acclaimed Masters of Harmony presenting their unique brand of vocal pop harmony of headlining concerts around the globe. As the Wall Street Journal proclaims, “Long live The Four Freshmen, may they never graduate.”